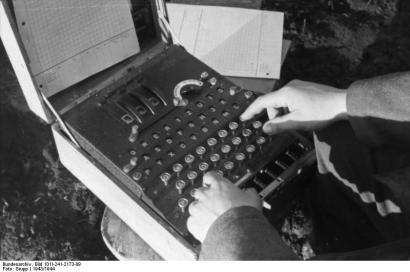 The process of selling is a process of decryption. Customers are rarely transparent when it comes to their internal decision process for purchasing products and services.  The standard method of selling is to build relationships, gather as much information as possible, and then make what really amounts to intuitive guesses about the next best move to close.  Seasoned sales reps and deal negotiators excel at picking up “customer signals,” interpreting their meaning and then taking appropriate actions towards winning the deal.  Of course, such people are also just as good at knowing when to give up on a sale that is a “waste of time.”  The problem is, the average rep is mediocre at decrypting what I call the Sales Enigma.

Poor decryption introduces inefficiencies and waste into the sales process and calls into question the value of sales reps in the age of Big Data and sophisticated data gathering and analysis algorithms.  Does spending a significant sum of money on Salesforce or similar CRM sales software solutions improve the odds of cracking the Sales Enigma?  In my experience, no.  CRM just makes a bad problem worse by adding more cost, time and complication to it.  I’ve been thinking a lot about this lately while reading Andrew Hodges’s biography,  Alan Turing: The Enigma

Without Benedict Cumberbatch’s portrayal of the “father of computer science”in the recent film, “The Imitation Game,” most people would not have heard of Alan Turing.  However, Turing’s work on computable numbers in 1936 was inspirational to me in 2008 and lead me to the mathematical ideas underlying Salesphase. But, what I’ve been thinking about lately is Turing’s actual approach to  deciphering WWII German navel communications encrypted by the Enigma machine. June 7th is the anniversary of both D-Day (1944) and Turing’s death (1954), so I thought I’d write about Turing’s influence on the underlying mathematical principals of Salesphase. 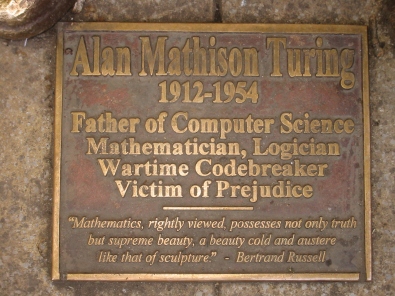 History currently holds that Alan Turing died from self-inflicted cyanide poisoning two years after he was convicted of “Gross Indecency” as a homosexual.  He had been put on probation and forced to undergo “chemical castration.”  I think reasonable questions remain open about the cause of death, which was not thoroughly investigated.  Certainly
at the onset of the Cold War, a homosexual with a background in military cryptography and knowledge of atomic secrets, may have been considered a target for enemy blackmailing.  The idea that Alan Turing would betray his country to keep his homosexuality hidden is ludicrous in hindsight,  but certainly it was a common fear within the intelligence agencies of the United States and Britain that may have caused them to prefer a dead Turing to an alive one.  But, such conspiracy theories will remain for future historians to sort out.

Many people think of Alan Turing as having “broken” the German’s Enigma encryption code, but that is not exactly what happened.  The story is a long and fascinating one involving many people that I won’t cover here.  I do highly recommend the 2013 lecture by James Grimes at the Perimeter Institute, where he not only explains the history, but demonstrates code breaking with an actual German Enigma machine. 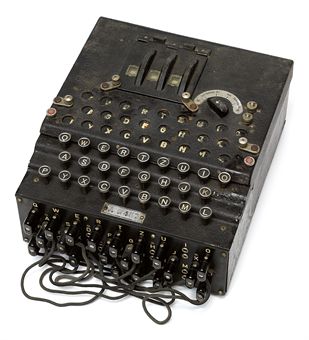 Turning’s genius was in realizing that it was not necessary to to search through more than a thousand trillion possibilities looking for the daily German encryption settings that would turn intercepted gibberish morse code signals into understandable German military
intelligence.  He realized, based on the mathematics of group theory and logic, that if one guessed at a word that was probably contained in the encrypted message, AND one knew the internal construction and wiring of the Enigma machine (which he did thanks to a Polish mathematician), then it was possible to build an electro-mechanical machine to help quickly find the most likely initial settings used on the Enigma machine THAT DAY. 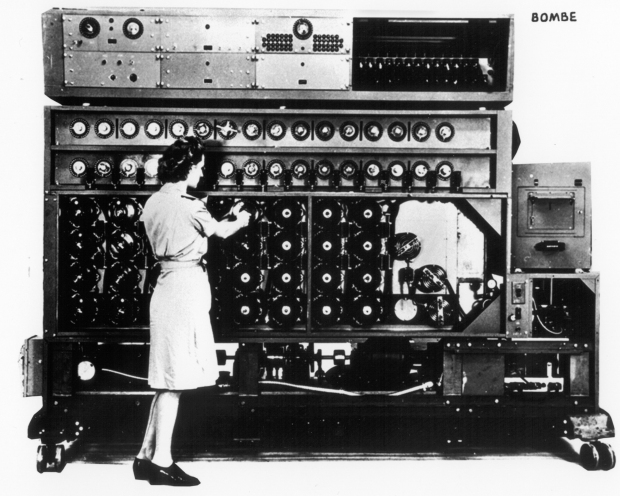 In less than 20 minutes, the “British Bombe” as it was called, could rule out millions upon billions of possibilities as being impossible candidates for the daily German Enigma machine code setting.  What was left was a list of possible codes that could be checked by human analysis to find the right one.

Is this difficult to understand?  Not so much if you think about it another way:  You lose your car keys, but you know you had them yesterday.  Where could they be today?  You know they’re around somewhere because your car is in the garage.  That means looking anywhere you were the day before leads to a contradiction–if the keys were at your friend’s house, your car would be there, not here.  So, no reason to call you friend and ask if she’s seen them.  As you look around the house you might rule out other possibilities:  the keys can’t POSSIBLY be in that pair of pants because I got a stain on them last week and meant to drop them at the cleaners. Etc. etc.  By ruling out contradictions you continually narrow down the places to search to the most probable locations.  If you’re the type of person that searches randomly when you loose something, well, you might want to read up on the life and mathematics of Alan Turing.

Alan Turing’s life and work is much more interesting than Salesphase, but I do want to finally explain the connection:  Salesphase operates like the British Bombe to help sales reps decipher and interpret customer signals about particular deals. Salesphase mathematically quantifies the hidden information and complexity of each deal and then uses key information to eliminate great swaths of uncertainty and complexity that too often are considered “information.” In the Salesphase algorithm email communications, phone call notes, sales meetings agendas, etc. are noise.  CRM applications, like Salesforce, encourages the collection of “noise”  which it then attempts to organize and visualize using statistical approaches. Salesphase operates in a completely different way.  It uses answers to a finite number of straightforward conversational non-technical questions to eliminate noise and identify the most probable next steps to closing a deal. Instead of complicated output, it generates a multidimensional shape that gives reps a visually intuitive understanding of the status of any opportunity regardless of customer, technology, deal size, complexity, etc.   It gives an average sales rep access to the genius of Alan Turing.